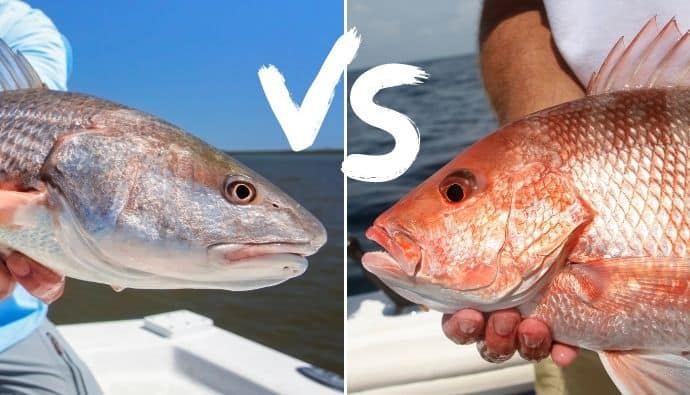 Redfish vs red snapper: what’s the difference between the two?

Do they both live in saltwater? Check.

Do they both share the same color, red? Check.

Are they both fish? Check.

Finally, are they both absolutely delicious? This time the answer is not a check, but hell YES!

Redfish and Red Snapper are both incredibly delectable game fish that are quite the fight on a pole. Though they share some similar features. These two fish are completely separate entities with their own unique characteristics.

Both have suffered from rampant overfishing in the past century, are staples in southern seafood cousins, and yet have completely different life cycles and flavor profiles.

The name Redfish is used synonymously with Red drum, but both describe the coppery-gold fish that ranges from Massachusetts to Mexico.

Redfish range from habitats such as mangrove and grass swamps, coastlines, brackish estuaries, and river mouths. Their habitats range in depth from over 200ft to shallows of less than 12 inches.

Much of their location is dictated by the redfish season. For instance, during warmer months, they often can be found in the shallows or cuts in marshes.

During wintertime or colder months, they can be found in deeper water, lethargically waiting for currents to bring them food.

Red snapper can be found up the Atlantic coast down through the Gulf of Mexico into the coast of Mexico itself. This beautiful, ruby-scaled fish can be caught in water ranging from 30 to 300 feet in depth.

Usually remaining close to the bottom, they inhabit ledges, ridges, and artificial reefs. They usually congregate around underwater structures such as oil rigs. Oddly enough, the level of snappers in the Gulf of Mexico increased after the oil boom during and post World War II which created the underwater structure for the snappers to inhabit.

When near underwater structures, red snapper tend to remain in the middle to upper levels of the water column. The deeper the water, the larger and more mature the snapper will be. Snappers can be very territorial and will not share space with juveniles.

Redfish begin life as “fry”, spending their early days after hatching in the estuaries and marshes. After a year of life, they reach lengths of up 12”-14” and begin to predate on larger crabs, shrimp, and baitfish.

By the 3-5 year mark, these 10-20lbs redfish transition to waters reaching a depth of up to 200ft. Redfish can live up to 40 years and reach weights above 50 pounds.

With a life span of over 50 years, red snapper start their lives in areas with little cover but lots of food. Oyster beds are one of their first choices to gain maturity and move from the juvenile stage.

Once they’ve outgrown their current habitat, snappers will make their way to reefs or other underwater structures that lack the presence of a more mature, larger snapper.

Once they’ve outgrown this habitat, they will make their way to underwater structures such as oil rigs, shipwrecks, or larger reefs and begin to move up the water column. The largest of the snapper will usually occupy the deepest of water.

Red drums are coppery-gold, oblong fish. With their voracious appetite and aggressive demeanor, a redfish’s diet consists mostly of smaller fish, crabs, or shrimp. Bottom feeders, they use their sense of sight and touch to locate food.

When swimming through the middle to the top of the water column, these fish use changes in light to detect food. The male redfish utilizes its swim bladder vibrations to make drumming or knocking sounds during spawning. The trademark spot on redfish is tales is believed to represent an eye that will fool any predator looking to attack a redfish from the rear.

With his compressed body and spiny dorsal fin, the red snapper is a bulldog in the water and on the hook. Having sharp, short needle teeth, the adult red snapper usually maintains about 24 inches in length but has been known to exceed 39 inches.

Reaching weights of over 50 pounds, the red snapper has been known to live well over 50 years.

A snapper’s pigmentation tends to be light red to pink on its flank while darker red scales cover its back.

Juvenile red snapper have been observed with dark spots on their sides, which potentially has caused confusion among anglers looking for redfish. However, these spots will often fade with age.

Redfish can be angled for in a variety of ways. For coastal waters and surf zones, both a popping cork or Carolina Rig with a shrimp or crab can be an incredibly effective tact.

In the marshes, mangroves, and shallow water, soft plastics and topwater work well along with specific fly fishing flies.

Selecting the proper rig for one’s environment is essential when angling for redfish.

Fluorocarbon leaders, braid, and a sturdy rod are always a necessity. Whenever possible, implement fresh, local bait to increase the chances of landing a big one.

Red snappers are easy to angle for. Once the angler has located an underwater structure such as a reef, or a wreck, live or dead bait such as Pogi, herring, or cigar minnows will be placed on a circle hook and dropped into the water column.

Live bait will often produce larger snapper, while dead will do the opposite. Modifying the bait itself, by clipping the tail off will make it easier for the red snapper to consume.

Alternatively, two or three hook rigs find success when the bite is slower.

Thin wire circle hooks are threaded through both lips of sand perch, rock bass or ruby red lips, and throne near reefs or other underwater structures.

This bait can be butterflied to release scent into the water which will attract larger snapper who don’t wish to chase bait.

Redfish is incredibly popular as a source of protein in southern cuisine. Its white, mildly sweet flavor is delicious and commonplace in many seafood dishes. It’s important to note, that the larger of the species tend to have worms or be riddled with parasites.

The best for consumption usually tends to be below 24 inches. Chef Paul Prudhomme is often attributed in putting blackened redfish on the map in the 1980s, which has since become a commercial success but also led to the drastic overfishing of the species.

Red snapper or a delicious fish that is often commercially caught for restaurants throughout the United States. It’s a low-calorie, lean protein-rich fish that is filled with vitamins and omega-3 fatty acids.

However, red snapper contains mercury which can be detrimental to young children and pregnant women to eat repeatedly.

Snapper can be prepared in a multitude of ways. From baked, deep-fried, pan-seared, or broiled, red snapper is a delicious source of protein.

It is a sweet, slightly nutty fish with an incredibly firm texture and is excellent for kids who have a distaste for overly fishy meals.

Though they share a lot of similar habitats, Redfish and Red snapper could not be more different.

They are both delicious, incredibly popular in southern seafood cuisine, and tend to be the centerpiece of any dish they find themselves on.

However, when fishing for them, both angling techniques and bait are completely different. Redfish have a preference for shrimp, crabs, and smaller minnows.

They prefer shallows; oftentimes in marshes, mangroves, and other brackish estuary-like bodies of water.

Snappers, on the other hand, prefer oyster beds and much deeper water, sticking to the lower levels of the water column as the species gets progressively bigger.

Redfish tend to be incredibly healthy, delicious sources of protein. However, they can be riddled with worms as they progress into the larger members of the species.

On the other hand, Red snappers are lean sources of protein that come with a sweet, mild flavor but are high in mercury. This means they can be dangerous to consume in large quantities.

When angling for Redfish, it’s unlikely that an individual will catch a mature Red snapper unless out on a boat a significant distance from shore.

Angling for Redfish is often very successful with plastics and other artificial lures, which can be effective in marsh and estuary habitats. For Red snapper, live or dead bait is the best choice.

Placing this on a circle hook and dropped into the water column’s middle or lower levels is the most likely recipe for success.

Redfish and red snapper are both delicious game fish and can be quite the fight at the end of a rod. Though they share much of the same general habitat, the two fish could not be more different.

However, the differences between the two are what makes angling for each so enjoyable. With the information provided about these two, it’s up to the reader to decide which fish they wish to book a charter for. As always, be safe and good luck on the water. 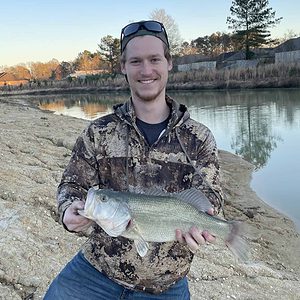 Jon Stenstrom
Founder
Did this article help you? Yes No
× Why not?