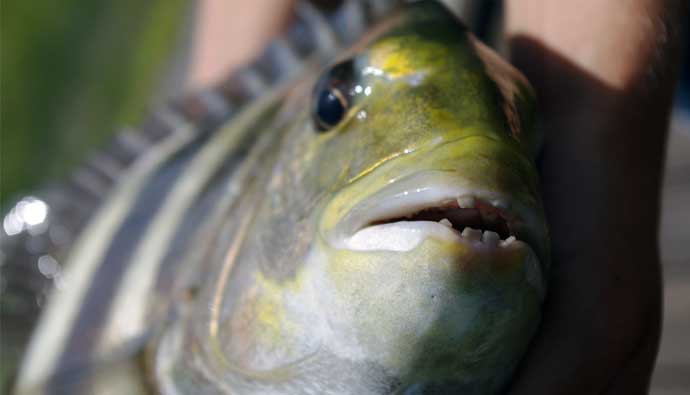 Did you know there is fish that has a full set (and more) of human-like teeth?

Meet the sheepshead or sheepfish. This fish with a face that is straight from your nightmares. However, despite its somewhat hilarious appearance, it is considered a great catch by anglers.

In this guide, we’ll show you how to catch sheepshead for yourself!

Also known as the convict fish, freshwater drum, and sheepshead seabream, the sheepshead is the most powerful member of porgies. It has great commercial value as a food fish and is a favorite among saltwater anglers in the US. The fish can be caught around barnacle-encrusted structures along shorelines.

The sheepshead is predominantly black in color but the sides and caudal peduncle are striped with broad silver and black bands. The mouth is small to medium in size and the teeth are broad and flat which it uses to crush the shells of crustaceans and mollusks while feeding.

This species occurs from Nova Scotia to Florida as well as in the northern Gulf of Mexico and southern Brazil.

Sheepshead can be found swimming in bays and estuaries right along the shoreline. The fish also enters brackish water in coastal rivers at times and often travels in schools. As browsing feeders, sheepshead forage for food around the pilings of docks and wharves and may also be found around jetties, rocky bottoms and in areas where oysters and mollusks are aplenty.

How to Catch Sheepshead

This fish is a fighter so it is best caught on bait, on the bottom or with float rigs preferably with a light or medium tackle. The best bait for sheepshead is anything they love to feed on such as shrimp, mussels, clams, crabs, or cut baits. Since the fish is known for being wary, use chumming to make it overcome its fear.

Sheepshead fish have a very light bite despite its massive teeth and it has a habit of stealing bait. Make sure that the hook you use is sharp enough to set firmly in its hard mouth. Use a 6 to 7-foot medium action rod that has a light touch so you can feel bites and use a braided line that is limp and doesn’t end up in knots. 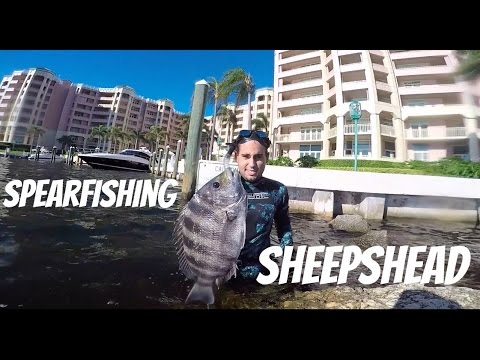 Catching convict fish can be done all year round in Florida bays and estuaries right along the coastline. That is where the fish remains during summer, spring and fall. Large and mature sheepshead migrate to offshore spawning grounds in winter.

The fish is active in West Michigan during the early summer months but activity is low during late June and early July in the region.

How to Clean Sheepshead Fish

How to Cook Sheepshead

A: The flesh of the sheepshead is bony but not meaty either.

Q: Why is sheepshead called ‘fish with the big teeth?’

A: The fish has large, broad, and flat which is used to crush and chew shells. The teeth are almost human-like and it actually starts to develop molars at the back of its jaw when it grows into an adult.

Q: How big can sheepshead get?

A: This fish can grow to about 3 feet in length and can weigh over 25 pounds. On average, the fish grows about a pound in weight.

The saltwater sheepshead is a great commercial value and puts up a fight that makes it a favorite with anglers. Do you have any tips, tricks, and strategies that worked while you were angling for this fish?