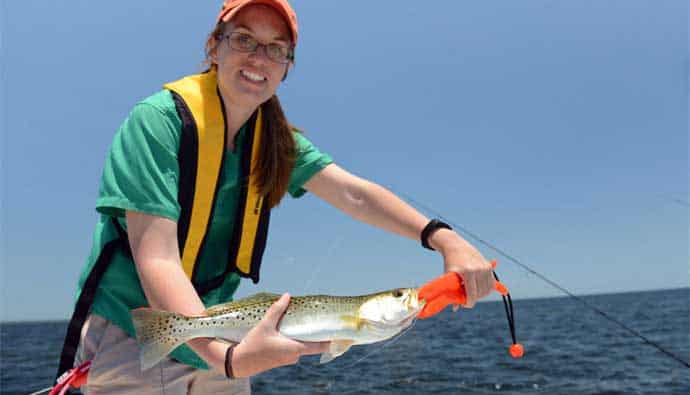 Do you want to catch trout in the sea?

Test your mettle against the sea trout using these speckled trout fishing tips!

The spotted sea trout can be found along the Gulf of Mexico and the Atlantic Ocean. However, they are most abundant along the coasts of Alabama, Florida, and Georgia. The spotted variety, which is the focus of this guide, has a long and elongated body with an even fin tail that has a black margin. It is dark grey to green in color at the back and has sky blue tinges that graduate to a silvery sheen.

The main diet of this predatory fish includes shrimp and small fish, but they are also known to chow down on mollusks, mullets, and silversides. Larger sea trout primarily hunt for fish, while the little ones survive on grass shrimp. While this trout is coveted by anglers, it is not listed as an endangered species in the wild.

The spotted sea trout is a demersal fish that can be found in brackish to marine water, but it has also been seen in the shallow coastal and estuarine waters over sandy bottoms and amidst seagrass. This fish can also be found in salt marshes as well as tidal pools that have 75% salinity.

The trout congregate in seagrass beds during warm summer months and move to deeper pockets of water or estuaries during the winter. That is where they spawn and rarely leave.

How to Catch Speckled Trout

The best-speckled trout bait for sea trout are the live ones such as minnows and shrimp, but you can also use soft-shelled crabs, mullet, worms, and squid. When it comes to sea trout lures, there is a variety you can choose from bucktail jigs, grubs, soft worms, spoons, and streamers.

If the fish is feeding close to the surface, you should use surface plugs and popping bugs for fly rods to catch them.

If you are sea trout fishing with artificial bait, use medium to medium-heavy rods and if you are using the live variety, go for only medium rods. Since sea trout do not usually fight the line, they can be pulled away from the structure they are hiding behind with a light line. A basic reel will be enough to give you the drag you need, and a braided line is considered to be the best for catching sea trout because it is quite thin and stretchy.

The best leader line for sea trout is considered to be fluorocarbon since it is strong enough to withstand abrasions. This comes in quite handy because this fish has sharp teeth that can do short work of a weaker one. As a rule of thumb, use a 20 lb leader when you are fishing for this trout especially if you are angling for the big ones.

Fresh speckled sea trout continue to run through August and that time can extend in some rivers. However, as the season progresses the chances of catching a big one increases. The fish can be caught throughout the year but you should wait a couple of weeks after they spawn to catch bigger ones.

Generally, the population of this trout increases when the water starts to warm up. In this case, plan your fishing trip for May

How to Clean Speckled Trout

How to Cook Speckled Trout

A: The flesh is delicately flavored but makes sure to store it in ice as soon as you catch it or it will spoil fast.

Q: Are weakfish and sea trout the same?

A: No. While the weakfish and sea trout come to belong to the same family, they look different from one another. The former has elongated spots whereas the latter has rounder ones.

Q: Where can I catch sea trout?

A: The sea trout is an inshore, bottom-dwelling species that inhabits shallow canals, bays, estuaries, and bayous.

The sea trout is an angler’s dream and the best part is that it is available year-round. It tastes great too which you can experience yourself when you make the recipe mentioned in this guide.

Do you have any great recipes and tackle techniques for catching this trout? Share in the comments below and share the guide if you liked it.