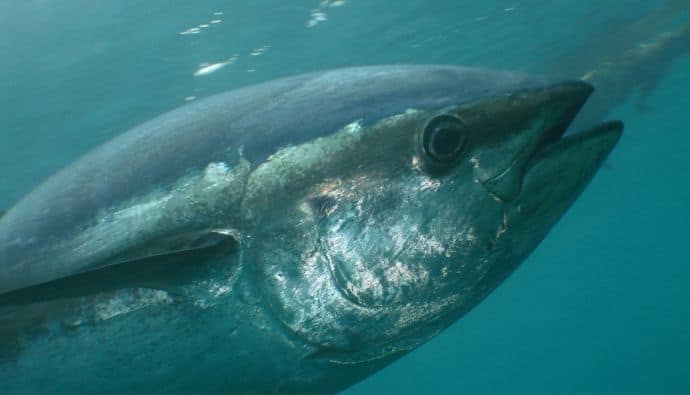 Ever seen a bluefin tuna and want to catch it? This is a fish that’s popular all around the world! Because of their size and taste they can be quite expensive too!

Tuna season is coming, and it’s time to get ready before you can feel the thrill of a catch again.

Whether you are new or a veteran angler, catching bluefin tuna can be the most exciting thing you can do out in the ocean.

Understanding the said tuna species and their behaviors can help you enhance your fishing skills. You might get more catches during the blue fin tuna season.

Here are things you need to know when looking to catch a bluefin tuna.

Where to Catch Bluefin Tuna

You can catch bluefin tuna in the Mediterranean, the Black Sea in Europe, and the Atlantic and the Indian Ocean. Like any other tuna, this species is a highly migratory fish.

In November, the bluefin tuna fishing season begins and can last as late as May. Bluefin reaches the ocean in the first season (May or July), and from November to December, you can see tuna at depths of more than 100 feet.

As for Southern California, the typical tuna fishing season is from July to September. It is the most requested seafood, especially in Japan and Europe, where you can buy it for a high price.

Knowing the location where these tuna spawns protects the future generation of this species. It will help recovery and ensure the catch for the coming years.

Knowing their migration patterns will help you understand when and where you will go for bluefin tuna fishing.

How to Identify Tuna

By understanding what this specific kind of tuna eats, you can know the best lure and jigging rod techniques that you can use to lure them. Bluefin tuna feeds on sardines, flying fish, and mackerel.

Although they are opportunistic feeders, they can adapt to a comprehensive food range that is available.

There are two main populations of this tuna spawns on the Mediterranean Sea and the Gulf of Mexico. The peak season of spawning in the Gulf is from April and May.

While in the Mediterranean, the spawning season is from June to July.

This type of tuna spawns in the Southeast Indian Ocean between Indonesia and Malaysia. They travel to feed on the Great Australian Bight.

It spawns in the Northwest Pacific Ocean islands, between Japan and the Philippines. They travel across the Pacific and feed and grow in Southern California.

The biggest in the family of tuna; was recorded from Nova Scotia in Canada. Quite popular in England too.

The yellowfin tuna is a fast and strong predator, and also an important fishery everywhere it lives. Like many open-ocean bony fishes, yellowfin tuna starts as tiny larvae.

These larvae are no more than a few millimeters long and weigh only a few hundredths of a gram. Within two years, yellowfin tuna reach the length of three feet and is sexually mature.

This tuna is similar to the size of yellowfin tuna but smaller than bluefin. Bigeye can live as long as fifteen years. You can find it in the tropical and subtropical areas of the Atlantic, Indian, and Pacific Oceans.

Bluefin tuna fishing can be exciting to do. You need to know the difference and prepare before you head to the water and catch. Anglers should get the right boat for the job.

If you’re going to be spending days on board, it should include the necessary resources you need.

A good boat will also give a safe landing wherever you choose to park it.

There is enough variety in makes and models to be able to find what you’re looking for. Also, a vessel or a boat is built for different areas.

For example, boats built for gulf fishing might have different attributes than those built for deep-sea fishing.

Ensure that the boat has appropriate outriggers to provide stability, especially because there is a lot of windage in the tower.