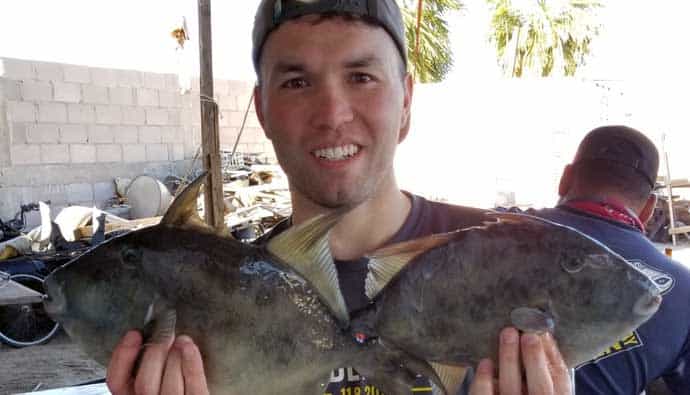 Gray triggerfish balistes capriscus hold a special place in my heart. On a trip to Baja, I was fortunate to catch them using a rod and reel, as well as, spearfishing.

They also have a crazy spike on their dorsal spine that can hurt you if you’re not careful. The locals in the Gulf of Mexico love to make gray triggerfish ceviche too.

I hope this guide helps you catch more of this awesome fish!

There are over 40 types of triggerfish in the world and almost all of them are brightly colored members of the Balistidae family. The fish inhabits tropical and subtropical oceans across the globe. Most of them can be found in the Indo-Pacific in shallow, coastal habitats such as coral reefs. The gray triggerfish is popular as an aquarium fish but it is also quite ill-tempered.

Gray triggerfish have an oval and compressed body with a large head that ends in a strong jaw and they have 3 spines on the anterior dorsal fin. Each jaw has a row of four triggerfish teeth on each side and the upper jaw contains 6 pharyngeal teeth.

Juvenile triggerfish are yellowish and have tiny violet dots. Adults are targeted by amberjacks, grouper, and sharks. Juveniles are targeted by dolphinfish, marlin, sailfish, sharks, and tuna.

Triggerfish like hard bottoms, ledges, and reefs. They can be found near and offshore locations. It can be found in seaward reefs, bays, and lagoons about 55m below the surface. Adults swim along the bottom alone or in small schools while young ones swim near the surface with sargassum aka microalgae.

If you want to catch gray triggerfish then you need to visit the Gulf of Mexico, especially the Bay of LA. You’ll see massive schools of gray triggerfish. While spearfishing, I’ve had entire schools follow me. According to the NOAA fisheries, the fish stock is rebounding.

In Baja, the minimum size isn’t well established, but when fishing, it’s good to remember what’s set in a state like Florida for reference.

These triggerfish are feisty.

Don’t let their small mouths fool you. They can snag your baits and rip them off without you being the wiser. To prevent this, use small and sharp circle hooks. The fish will not be able to split these as easily as regular hooks.

Triggers go for almost any bait that is thrown but try squid. It sticks to hooks firmly compared to other bait but uses a chunk that is an inch wide so it doesn’t slip off. Plus, since this fish remains near the bottom use a sinker that is at least 6 to 8 ounces heavy.

In Florida, the season for gray triggerfish is in flux. Check state regulations before heading out or you may have to pay a hefty fine.

These fish aren’t a challenge to find or shoot in the water. They tend to be in monster schools along the coast of Baja, the challenge is finding the big ones. Often their behavior will lead to their end. They will follow you in the water, especially near the coast while you’re looking for other species.

The challenge is after you shoot them. You’ll need to hold them by the body, not by the gills or mouth.

Triggerfish are a bit unique in terms of how you should fillet them. It’s better understood if you watch someone do it through video. 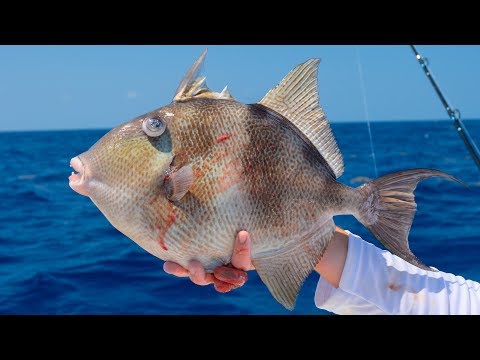 While in Baja, you’ll be eating plenty of snapper and grouper, so why not make some ceviche to complement it.

A: The fish is docile and inquisitive when it is approached but it can be quite aggressive and territorial during the breeding season and can attack. Giant ones such as the titan gray triggerfish have been known to attack divers.

A: Some species of triggerfish cause ciguatera poisoning when consumed.

Venture to the Gulf of Mexico where they are abundant to increase your chances of hooking up. And make sure to gear up well with the right rod and reel that works for you. Just like how the Ugly Stik rod and Penn fishing reels do me good.